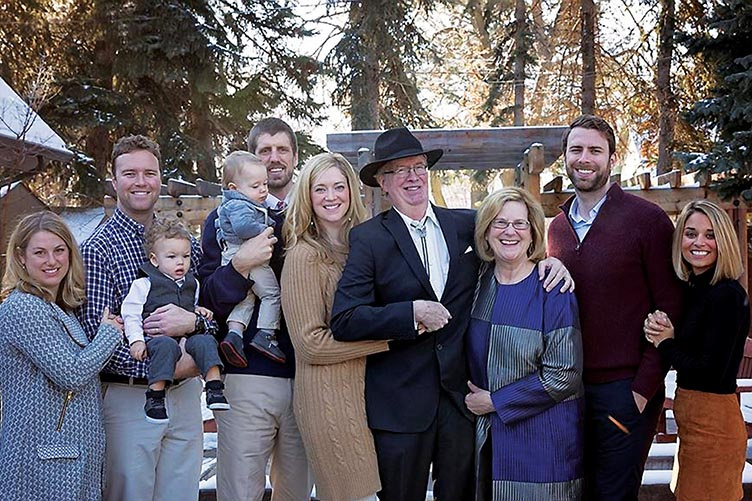 (UNH Today, March 28, 2019) Brain tumor. Before he heard those words, Terrence “Terry” Cromwell ’79L had served as a sergeant in the Marine Corps, raised three children with his wife of 43 years and built a successful and varied legal career that included work in corporate law, construction law and high-tech. Cancer, and the treatments that came with it, brought that career to a halt.

“But lucky for me, when I was diagnosed I had enjoyed a long history of creative writing, with the publishers’ rejections beginning in the ’70s to prove it,” Cromwell says, his wit — and his refusal to let illness stifle his creativity or his humor — evident in each comment he makes. “My reward for beating a 2008 prostate cancer diagnosis was a brain tumor in 2011.”

Post-diagnosis and through his still-ongoing treatment — in the midst of which he could not speak, walk, see clearly or swallow, necessitating an emergency tracheostomy — Cromwell has had a strategy. “I’ve been evolving my writing from …..(read the full article here)

ICU after craniotomy#2. Hugs telling me I look wonderful! Mwahaha!

Who in their right-mind; who has continuously been engaged in a nearly 7-year brain-ear-throat-tumor-battle leaving him disabled; who has also successfully fended-off spinal meningitis and multiple-cancer diagnoses prompting successful radio-activity treatment in the form of Brachy-therapy; who has survived two full-on craniotomies, a fusion and proton therapy; and who has stopped breathing ….(read Tc’s full history here)

RAiLBAK: Bigger than a Book (or two).

As you get familiar with Railbak, you will recognize he doesn’t believe in doing anything 1-dimensionally on the surface; unless a deeper purpose is contemplated. With that in mind, as RAiLBAK books are launched; so begins the effort to fund the HUGS Foundation. Railbak knows only too well the financial and emotional toll that health, education, nutrition and safety (HENS) issues can bestow on family and (more)

Translation Introduction
WELCOME…BIENVENIDO…BIENVENUE…BENVENUTO
Tc is delighted to translate the most recent RAiLBAK Adventures Novella into Spanish and Italian now and later into French;  (thanks to the magic of on-line apps cause he’s not that bright). Languages have long been important to Tc and (more)

She’s missing… broadens the reach of contemporary RAiLBAK creations by hopefully tempting a new breed of young-adult fiction readers to discover She’s missing… and splurge for a few hours to appreciate the rough-hewn, old-school method of character-focused, purposeful writing; as evidenced in this latest manuscript.

Now Railbak returns to his Montana beginnings compliments of Tc who brings Railbak’s dynamic military ops adventures to light from the dark global shadows Railbak operated in as a US Marine, after casting long shadows over his beloved Montana as a favorite son. Railbak is again recruited by the US Government to bring his unique brand of Montana-character driven trouble-shooting to terminate a domestic terrorist threat centered in the neighboring state previously known for its Badlands. Only this time a terrorist threat focused directly at the upheaval and cessation of production of a million-barrels of oil per day from the richest oil patch in the US, commonly known as: The Bakken. (approx. 150,000 words)

Tc’s (Purposeful) RAiLBAK Adventures Vol II is a typical Tc-creation:  Conversational Novella. But don’t think for a minute it’s necessarily a short, fast read. Vol II is approximately 45,000 words and at times a complex read, confusing even Tc because it’s dedicated solely to characters’ conversations. When Tc’s under-performing left eye starts to shut down; it for some reason transfers a like sentiment to Tc’s brain and he periodically has no idea who is speaking which is the not-so-subtle sign for: break time. Regardless the roller coaster element to Vol II; it provides a valuable look at the preparation and chaos, which is a signature characteristic of Railbak missions. Every participant on Railbak’s teams is a leader and expert in their skill set; and it shows through during Vol II’s purposeful interaction between the team contributors. Enjoy; as we prepare with Railbak for Volume III.

Tc’s RAiLBAK ON: (Series) Vol I

Tc’s RAiLBAK ON: (Series) Vol I. Tc was inspired to create his RAiLBAK ON: (Series) by James Joyce’s classic collection of short stories made famous in his much-loved work Dubliners. Volume I is predictably comprised of warrior-Railbak-oriented subject matter including his beloved Montana; dark-operator-style insights such as his relationships with global Super Spies; flush with Railbak’s typical straight-talk, as a military-mission-leader, commenting on his insights about interrogative Torture; and sprinkled with never before seen diverse stories revealing Railbak’s philosophical-side such as his surprise at finding hero’s among us; Railbak’s experiential insight into the perpetual, complex search for Happiness; also his observations at the never-ending, passionate efforts by members of his inner circle to enhance personal Parenting accomplishments and family Economics; and the gentler side of Railbak displayed in his Poetry. Enjoy.

Tc’s RAiLBAK ON: (Series) Vol II. Tc was inspired to create his RAiLBAK ON: (Series) by James Joyce’s classic collection of short stories made famous in his much-loved creative work Dubliners. In Volume II Railbak communicates his most personal non-military observations with assistance from various ghost; and not-so-ghost; writers to bring to the market the intriguing and humorous short stories of his personal marvels which cover the intellectual gamut of family life of Railbak’s inner circle advancing purposeful leadership for the next generation in: The Truth Will Out; What’s in a Name?; Birth; Youngest on Change; and Oldest in Charge. Enjoy.

Tc’s RAiLBAK ON: (Series) Vols I and II

Get both of the above books in one purchase!  Tc’s RAiLBAK ON: (Series) Vol I and II Combined.   Tc was inspired to create his RAiLBAK ON: (Series) by James Joyce’s classic collection of short stories made famous in his much-loved creative work Dubliners. In Volume II Railbak communicates his most personal non-military observations with assistance from various ghost; and not-so-ghost; writers to bring to the market the intriguing and humorous short stories of his personal marvels which cover the intellectual gamut of family life of Railbak’s inner circle advancing purposeful leadership for the next generation in: The Truth Will Out; What’s in a Name?; Birth; Youngest on Change; and Oldest in Charge. Enjoy.

“It’s terrific Tc! Railbak moves fast with fun facts delivered with easy eloquence and humor; a familiar and comforting style like that of an old friend. You have found your voice. I love it!”
-RC, Las Vegas

Happiness is the Way

"For a long time it seemed to me that life was about to begin-real life. But there was always some obstacle in the way. Some thing to be gotten through first, some unfinished business, time still to be served, a debt to be paid. At last it dawned on me that these obstacles were my life. This perspective has helped me to see there is no way to happiness. Happiness is the way. So treasure every moment you have and remember that time waits for no one."
-Father Alfred D’Souza, circa 2004, Brisbane, Australia

Tc often observed personnel in the diverse organizations he worked with were proud, loyal and operating as purposeful, efficient family units; clearly concerned with the overall health of the brand. Tc now believes he can add value to a company by accentuating its soul through poetry. (read more)